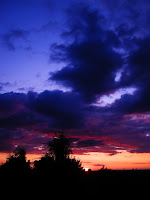 August is one of those months that I both love and hate. I love the fact that it is usually very sunny and dry, in contrast to July. Almost as a rule, August and September tease us with the last feelings of summer, even though almost as if by a stroke of magic, from pretty much one day to another, the evenings get colder.

And most of all, darker.

This is very palpable from my living room windows, which offers magnificent sunsets from the early spring to late autumn. I have dedicated numerous posts to this natural, almost theatrical event, as the sunset fascinates me incredibly. Living on a hill right above the city, I love to watch the changes in the journey that the evening sun takes over the course of the year. The White Nights officially ended this past Friday, which means the end of my favorite season of the year and the beginning of the sun recession.

The sun moves from the ultimate southwest in January towards the west and I love to watch it re-appear in late February, when it once again becomes visible in my view. In the course of March through May, it offers breathtaking light shows, setting further to the right in my view, until mid June, when it sets almost in the far northwest. I have to lean out of the window to watch it set, as it leaves a trace of blood-red sky that doesn't disappear, but moves slowly to the far northeast, turning into sunrise, creating the magic of the Scandinavian White Nights.
As soon as July reaches its end, the setting sun is venturing on the opposite journey back westwards and then slowly back to the south in August through October. Until it disappears all together comes November, setting behind the hills in the southwest, becoming absent for at least three months in the depths of winter, starting in early December, making the day about 10 hours shorter then in the summer months.

Already now, the sun has moved back and the day has lost two hours since the summer solstice. For the next two months, the beautiful solar shows will once again take place in front of my windows, reinforcing the fact the nature is the most talented performer. 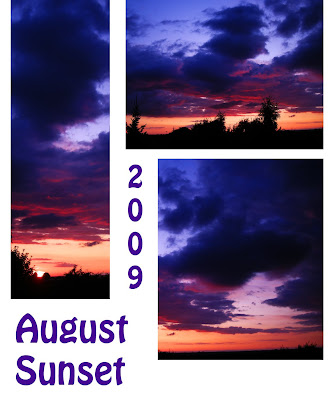 What stunning shots of the sunset.

I live just north of Stockholm and really revel in the long light nights.

I don't want it to get dark and cold yet... please tell me it isn't really happening...

WOW... what a window to be in front of every day! The scene is truely out of this world
The sunrise and sunset creates and recreates a magic everyday... but for us living in some of the Indian cities, polution has robbed us of this magic.

yes I know what you mean. our days are getting shorter everyday now by so many minutes a day. how sad, I just love summer! but fall is a beautiful time of year also.

Beautiful photos! I love the August sunset colors you captured. I'm always sad when the days become shorter. Our summers are long so we've got some time to go before cool weather sets in.

I have experienced the Scandinavian White Nights and it was fun!

Those are the most magnificent sunsets colors I have ever seen! Your days may be getting shorter but the colors you are treated to are unforgettably beautiful!

I love August...my birthday is in August and it is a busy month for me because it's back to school.

=LadyFi,
welcome! I guess you must know and feel the difference in the sun light even more than I do. Yes, indeed it is true, today the White Nights end officially. I hate it too...
Thank you so much for stopping by.;)

=Sumandebray,
indeed, I have a stunning view, I fully admit. The weather is not always perfect, but at least I have that;))

=Doreen,
that is the spirit; autumn can even here be lovely, particularly September. And I guess in less than a year summer will be be back again right?;)

=Donna,
thank you.;)) Yes, I recall the NC summers, they were warm and long and the autumn with the change in the foliage out of this world. The winters very short, just like I like it. I miss that climate.;)

=Philip,
glad you got a chance to see and feel the light nights.;))

=stevie,
thank you so much, what a kind comment. Glad you like the colours, I am amazed by them myself.;)
xo

=Shelly,
glad you liked my August sunset.;) Yes, it is a good month to be born in indeed, my father would agree.;))
xo

WOW! those are THE MOST beautiful sunset colors i have seen in my entire life! the colors are perfect. it is so breathtaking, Protege! you are really lucky to have a wonderful sunset view from your windows. :)

ah, i like all your sunset posts! and oh August is not my favorite month for it brings all rain and crazy weather in my side of the world. :)

=Noelle,
glad you like the Scandinavian sunsets.;) Thank you for all those kind words.;)
How extraordinary that August is a rainy month in your part of the world.;)

This is a most beautiful post. I enjoyed reading it and viewing the pictures.

=gaelikaa,
thank you so much - glad you liked the pictures.;))
xo