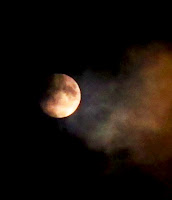 I have had the most beautiful encounters with the growing moon recently. As some of you might know, I am infinitely fascinated by this natural satellite of the Earth.

This past Saturday evening, as we walked in the fresh autumn air, so saturated with a promise of the first frost, we passed a nearby park. As a clearing came into view, suddenly the moon was just there, right before us, in all its silvery glory, large and heavy lying low over the easterly horizon. Like a lantern in the purple twilight sky, reflecting the sun, which was setting in the opposite cardinal direction.
Holding my lovers hand, feeling his warmth and affection in that one simple touch, I became spellbound by this unforgettable moment, as it etched itself in my memory, preserved forever.

Earlier this week, driving home through heavy showers, upon my final approach, the skies cleared and to my east the same moon was rising. Significantly fuller, it floated occasionally within my views, while the sun kissed it good bye. I felt such an urge to capture its beauty, yet once again had no opportunity to do so, which filled me with remorse.

The next morning, upon my solitary run, as I defied the cold arctic wind, making my way towards the lake, an alluring sight greeted me. The almost full moon was setting in the west, reflected in the rippled waters like a large glowing globe, while the world was waking up to a pastel coloured daybreak. What a reward for venturing into a cold, dark morning. Yet once again, only mental shots were the ones preserving this ethereal beauty.

However, the next evening, as I looked out into a starry night, there was a bright moon shine in my immediate view, beckoning me outside, with camera in my hand. Governing the ebony heavens, positioned high above the ground, in its full phase. Occasionally concealed from view by fast moving clouds, it appeared to be left temporary behind a veil of smoke. Enchanted and magical, as it always is in my perception.

Despite having witnessed its presence in the night sky endless times before, its allure will never seize its hold on me, as I continue my perpetual love affair with this platinum disc in the celestial sphere. 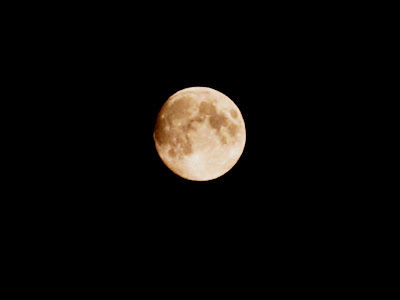 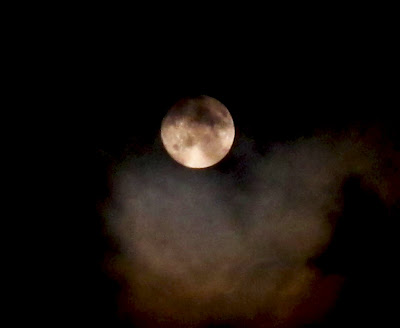 the moon is wonderful
day 11 was very well
a moon
only
and very beautiful
thanks for your words in my blog
you're a fantastic woman. kisses

Every night before I go to bed I love to look up at the moon too, to see the various stages it is going through.
Your photographs are wonderful and lovely to see.
Thanks for visiting my blog and the comment.

What gorgeous shots -so dreamy and romantic!

The moon is such a symbol for many things - so changing and beautiful in all her forms.

No-one writes about the moon quite like you - your words and photos are truly magical. Beautiful.

On our return from the cinema last night as we approached home the cottage was shining with moonlight - it was so lovely. And guess what film we had just seen? Midnight in Paris, the new Woody Allen film. Quite apt in a way.

I live the moon and you know it. Here, the moon looks so ethereal. I miss watching the moon these days as my house does not give a good view.

You take good care and hoping that lovely sights as these continue to enthrall you and your beloved.

I feel the same way about the magical, mystical full moon. I think it's the peacefulness of its existence...it's majesty almost. And, it's faithfulness to continue to start over. It is a constant inspiration to me...as are you.

Lovely photos Zuzana. I never thought of this before but I find myself studying the moon sometimes.I never realized it til I read your post.Its a sort of magic and mystery isnt it.I tend to wonder how far is that away from me or maybe imagine if I could touch it,how would it feel or what would happen would I disappear into nowhere lol.

Your posts are always post to make us all think.Think magical or deeply.Thanks for that.Blessings!

Lovely shots Zuzana.
Yest, even I was clicking some nice moon pics...
Zuzana, we just celebrated Navarathri at my place. Do have a look at the post, you'll love it... Here it is
Pond's UV Cream Review

Your photos are magical and so are your words. I have a strong connection to the moon, too. There is something about it that is mesmerizing.

Most defiantly, the lunar orb has been puttin' on quite the show lately. You captured the show perfectly!

I understand your love for the moon, she captivates me as well. So much beauty and power in the night sky. Your words give life to her and are a lovely Ode to nature and the work of God.

Lovely descriptions of the different phases of the moon. As always, gorgeous and heartfelt words. I love your pictures too. I'm blaming the full moon for the fact that our newly fitted bathroom is leaking! Well, you never know!
Dan
-x-

Along with lovely descriptive words.

Gentle hugs,
"O hushed October morning mild,
Thy leaves have ripened to the fall;
Tomorrow's wind, if it be wild,
Should waste them all.
The crows above the forest call;
Tomorrow they may form and go.
O hushed October morning mild,
Begin the hours of this day slow.
Make the day seem to us less brief.
Hearts not averse to being beguiled,
Beguile us in the way you know.
Release one leaf at break of day;
At noon release another leaf;
One from our trees, one far away."
- Robert Frost, October

Those are stunning photos of the moon Zuzana! I'm playing catch up blog reading this morning while the Merry Maid is here cleaning. I'm so glad to see you happy and settled into your new home and life and new man. My Hubby is away for the day enjoying his hobby at a trade show while I house sit. We leave Saturday for Walt Disney World! Everything is packed into our new van except for food and electronics. I'll be taking a break from blogging especially while at WDW. Have a lovely day!

nice...i love the moon as well...and glad it is looking in on you and keeping you smiling...

I never tire of the moon. NEVER. Lovely words and photos Zuzana.

How nice that the moon wants to talk to you. :) I love how it kept checking up on your like that. And the beautiful way your wrote this post just added to the loveliness!

Your description of the moon is almost poetical. I'll never forget a camping trip long ago when the moon hung in the sky like a ripe melon. I couldn't get my then hubby to wake and enjoy it with me so I celebrated the wonder of it by myself.

Dreamlike and poetic writing and photographs. I'm going to read it all over again. Fabulous post, Zuz!

Well, this IS interesting, Zuzana! Those photographs are quite good indeed. I too love the moon, even if I make cartoons out of it from time to time... :-)

We've got no moon at all these days, up North. Rain, rain, rain... It throws a blanket over (under?) the moon, a bad habit those clouds have...

Beautiful photos, Zuzana. I love how you notice everything around you.

I think I am very cyclical at the way the full moon always seems to effect me. (Body and soul)

The pictures are magnificent!!!

I was thinking about you just yeaterday, and how winter is right around the corner, and it is always the most difficult and ominous time of year for you. I couldn't help but smile as I realized that this winter will probably be very different for you with the voices and laughter of loved ones filling your cozy home.
I think this winter will feel very warm and inviting for you. That would be quite wonderful!!

This are truly magical pics of the moon

The Moon Is A Loyal Ruler. The 3rd photo.....It almost looks like a body underneath it!

walking here with a smile. take care.. have a nice day ~ =D

I cannot say why I am so drawn to the moon, but every time I see it, I feel uplifted.
Gorgeous shots, Zuzana!!!
Hope you have a lovely weekend,
~ Zuzu

We have a spectacular view of Truro Cathedral from our house and it has been wonderful to watch the moon over the three spires.I love to gaze at the moon too.

this is so beautiful, zuzana. you and i share a love of this celestial sphere. there are few sights more breathtaking than seeing the moon set in the early morning. that must have been some run ;-)

sending love and blessings for a wonderful week♡

Funny, I had the opportunity to see the moon through a telescope the other day. I saw its craters and felt its silence. It was nice, but I still prefer to see it from afar, the man smiling in it and the magic it creates. I love it too Zuzana.

This was beautifully written and photographed, my friend. I think that last photo looks as if the moon is about to nestle into a smokey heart.

wonderfully written. came over from hilary's to say congrats on your POTW!

Thanks for allowing us to tag-along with you Zuzana.

Congrats on your POTW.

I would like to thank you for the efforts you've made in writing this posting. I'm hoping the same very best function from you inside future too.

Dear friends, I am finally finding the time to acknowledge your lovely comments, forgive me this more than a month long delay.;)
Thus I wil not mention you all by name until I catch up with my belated responses, I hope you will forgive me.

I am glad that you enjoyed my recollection of a a few days with a wonderful moon - I think my fascination when it comes to this beautiful object in the sky is simply never ending.

Those of you who stopped by through Hilary's, thank you so much for your visit and kind words.
And likewise thank you all for your wonderful comments.;)
Xoxo
Zuzana