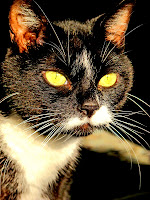 "... would smell as sweet".
This Shakespearean quote seems somehow so very appropriate to initiate this post with. And as you read along further, it will become soon clear why.

It has been a while ago since Batcat was featured in my writing. And many of you, curiously enough, have recently inquired about his well being.
Thus I decided to dedicate yet another post to my faithful traveler through life and my partner in crime, my furry friend - having been my devoted companion for the last eight years.

In that time span, he has been called many names and each name made him into a certain personality, yet in my eyes he has always been the same jovial feline, brightening my days and making me smile.

Batcats real name is actually Samson.
I named him that way when I collected him as a tiny, six weeks old kitten from a farm, some hundred miles north of where I lived. He screamed his lungs out the whole drive back home (and still detests being in a car). I contemplated many different names, wanting to keep the letter S, as apparently cats names should be starting with one. I have no idea where I have heard that or if it is even true. Still, when the name Samson entered my mind, I knew right away that it was the one, thus it was chosen - but come to think of it - never used.

My first serious boyfriend, with whom I acquired the cat named him Daloon. As in Da - Loon. Or The Loon. Perhaps because his eyes as a kitten were at all times huge like saucers and he was always looking for trouble, defying anything that came in his way. Never giving up or giving in, already as a kitten proving he was a REAL cat. A fighter.
He refused to be confided in a cardboard box and already as a tiny little thing was roaming our apartment. When we tried to prevent him from entering an open staircase by blocking it with cardboard as well - afraid he might fall through the stairs and be injured - he found a way of climbing the narrow space between the stairs and the wall by pushing himself upwards on his little paws - an incredible accomplishment and sign of resilience and determination.

When the Irishman came into my life, he very quickly established that Daloon was no Loon, but a Superhero. To him he looked like a feline Batman and thus he named him Batcat. This was when I started my blog and thus to everyone here my cat was known by this name. 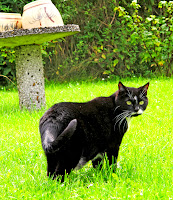 The name Batact has however been abandoned for quiet a while now and another name has gained hold. My new family call him today Sammy, a name instigated by the man I love and inspired by the original name; Samson.

Well, no matter the name, my devoted cat is my everything.
My baby and the one living, comforting soul that has been waiting for me in the dark house when I returned from work for all those years living on my own. The one who made my old house feel alive, when it was so quiet, deserted and still. That one living being that always stuck by my side when everyone else left me. The one into whose fur I cried bitter tears when I was feeling the loneliest I have have ever been...
And the one who I hugged when I was the happiest I have ever been as well.

These days, I am not the only one whose life has changed dramatically. Even Sammy has undergone changes of major proportions.
He has been uprooted, relocated and furthermore been introduced to the outside.
Being an inside cat his whole life, the outside to him is as overwhelming as it would be for the common man to fly into space.

Today Sammy is however a content cat. Just like me, being almost middle aged, he is starting all over again. And just like me, he has finally come home - and in his case in more than just the abstract sense - I recently realized he was born on a farm only a stone throw away from where we live today.
How funny is that.

(All images in this post are of Sammy exploring and enjoying the surroundings of his new home, summer 2011) 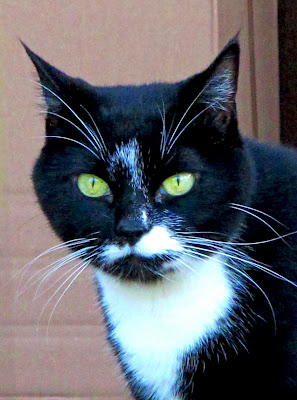 Welcome home Sammy! A wonderful story - and my, what a delightful milk moustache he has!

How lovely to see Batcat looking so happy and well. I was wondering about him.
Animals are so adpatable arent they x

Oh the beautiful Samsonite with all his naughtyness. Wonder if he gets himself in trouble out there in the great "wilderness" when he is taking himself on a new adventure. (lol)

Speaking of adventures. I started a new one too, have you seen it already?

It's great to hear the story of your cat, and what a cat, so many lives, identities and names to match but always underneath your black cat. Thanks, Zuzana.

So, is he now and indoor/outdoor cat, or an outdoor only cat?

Our cat, Brewsky, is a 13-month old indoor only cat, and I have wondered how an indoor cat of mature years would adapt to the outdoors, and, in your case, to life in a whole different place at the same time.

I forgot to mention that I made the top photo--for this post--my desktop picture. It replaced that of a wolf, actually. You gave me permission at least once to use your photos in such a way, so I took the liberty of making bold to do so again. So, let me know if you object.

My cat has also recently become and outside cat. He loves being outside! In fact, he CRIES if we don't let him out. I worry about him getting hit by a car but he wants to go out and out he must go.

Oh sammy is adorable.My oldest daughter has 2 cats that so hate the car.But my youngest guy lovessss it,lol.Im glad sammy is an inside cat my 2 are as well.

Happy new week to you Zuzanna,thanks for your sweet visit to my blog and your comment,always appreciated.

Ah, the return of the batcat. I've been wondering about him and the change of environs for him. I am glad that he is happy and content in his new home. Zuzana, I liked the way you've connected Batcat, your life and the surroundings. As always your posts have you in them. Glad to read this.

So wonderful to see Sammy happy in his new home. And you're so right, by any name he would be as charming and sweet. :)

Sammy does seem to suit him! He's a beautiful, big cat! And, of course, you know I love that milk mustache! ha.

so cool that he has come full circle and canbe home as well...great pics...we just recently took in a 4 week oldcat...and after a month our 11 year old cat is finally coming around to him and she is being more active than she has been in years...glad you are well zuzana

how brave both of you are, adjusting to new lives. they say cats have 9 lives..... how wonderful that he has a chance to rediscover the beautiful outdoors - thank you for sharing this story about your faithful companion through so many stages of life.

blessings for a wonderful week, zuzana ~

I do love cats so much. Yes Samsom, Sam or whatever name with an S for they here it well, so many of us call cats with some sibilant sound...

Mine (late Ulises) used to love going in the car, sometimes just a drive to the supermarket!
He never got his middle age, and after ten years I still miss him, especially when I read things like this.
Your Sam is LOVELY... How i'd love to stroke and scratch that forehead and hear him purring
:-)
hugs

Oh, how wonderful to be back where he came from. Sweet Sammy ~ he's the cutest! Love the post!

coming home...ahhh, such a blessing.

omg! at a glance I thought it was my cat come back to life.
He also was a tough smart fearless guy but we called him tatty cause his owner could not pronounce cat .he'd say tat.He loved his tatty.But our tatty had no white on top of the nose and he had eerie eyes with three colors.
Amazing

Congratulations to Sammy for having such a wonderful companion as you, Zuzana. He seems great and I'm glad he's adjusting to his new/old home.

Samson is a heart-breaker!

Aaawwwee what a great story!! Sampson is one handsome fella and your story makes me miss my Mr. Meowgee terribly! But I am so glad he has been able to be with you all this time, a true companion and friend. Isn't it funny how life can come full circle? :) Stay blessed!!

Very interesting. I am happy to learn about Sammy for the first time. In India we believe that the Dogs remain loyal to their masters where as Cats remain loyal to the house they live in. Even if the master leaves and moves elsewhere, the Cats remain. I think this notion is based on some false premise or could be peculiar to Indian breeds.

Samson has been with you on every walk of life. So sweet.

You KNOW I love to hear about...Sammy. He is beautiful and our furry friends are such an important part of our lives. Glad he is settling into his new home too.

He's such a handsome boy.. (and will always be Batcat to me.. it so suits him). Thanks for the update. I'm glad he's doing well.

Dear friends, I have been away traveling and am so way behind with my response to all your lovely comments.
So glad you enjoyed reading about Sammy and the way we have both adapted to our new home.:))
I truly appreciate that you all took the time to stop by, your visits and kind words were such a treat to find upon my return.:)
Xoxo
Zuzana

I'm so glad I came back to check out your blog today! It was a real treat to read about Sammy.

I've had 2 cats and it never occurred to me until your post that they both had "S" names. I didn't do it purposely though.

Dear sprinkles, so glad you enjoyed this Sammy update;))
xoxo