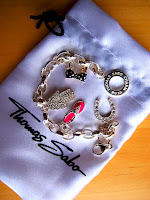 My sister invited me recently to join an exclusive club. The charm club at Thomas Sabo. A club I am very honoured to belong to. A gift for my last birthday, she has added four appealing charms to my new charm bracelet and the collection will be only increasing by each year.

The charm bracelet is most likely my first encounter with jewelry. My mother used to wear one on her wrist and I recall how fascinated I was by the multitude of charms adoring the chain, playing with it as she cradled me in her arms, when I was a little girl. My sister, I recently realized, has exactly the same recollection, giving my new bracelet a special meaning as it bridges two generations and redefines the bond between sisters.

The wearing of charms is an ancient tradition and may have begun as a form of amulet to ward off evil spirits or bad luck. During the pre-historic period, jewelry charms would be made from shells, animal-bones and clay and there is evidence from Africa that shells where used for adornments around 75,000 years ago.
Thus wearing mine also connects me symbolically to all the prehistoric sisters of my past. 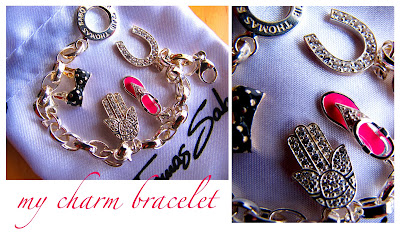 Can you guess my question? Well, what do the charms mean to you?

Have a wonderful day in the snow, again!!!!

Charms or not, these small figurines are indeed charming. Well, I would like to ask the same question as Elizabeth.

Nice pieces of jewellery, though. It would adorn well any lovley limb.

I have the same question as Susan & Elizabeth. Charm bracelets hod a fascination for me too, the significance of the charms on the bracelet hold the secret to the appeal I think.It is very special you and your sister hold the same memory dearly.

very cool. charm bracelets tend to take on the personality of the wearer or those tha are special to them..T has one that i got her before the boys were born its neat to look back on....

How beautiful! All the charms are so unique, but the pink sandal really caught my eye. I checked out the website and they have some really cool things. I had never heard of Thomas Sabo. Thanks for introducing me : )

I have a charm bracelet that I started way back in the late 60's. I'll never part with it. Sure like your charms!

Beautiful Zuzana and even more precious that you AND your sister are doing it together after the memory of your mother's bracelet. It makes is SO VERY special! Does your Mother still have her bracelet?

I too, would love to know the personal-to-you meaning of each charm. But I also understand that this is a too-personal question to ask. :-)

I remember charm bracelets, from "way-back" in my own history. :-) Nothing like yours of course, but the wearing of them, I remember.

Awww.. That is so pretty :) I came to know about charms when I read the book 'The Diamond slipper' by Jane Austen. I've always wanted to know this. How do you identify your charms? Do you have a story behind each charm? Or is it something that you choose based on your liking?

How wonderful to feel that connection through time. I think charm bracelets are so comforting. Each charm reinforces a good memory or aspect of our lives.

Someone as CHARMING as you would most certainly love a CHARM bracelet. Everything looks so good on you.

This is one piece of jewelry that I have never really gotten into, but yet I have always liked the idea of them and the history too. :)

You definitely would have been a Goddess in ancient Egypt or Greece Zuzana, adorned with beautiful jewellery! I am just back from a long hibernation and as always an interesting post awaits me. I didn't know the history of charm bracelets, but I must confess to having a certain fascination for them. My first "true" girlfriend loved charm bracelets so I was always adding to her lucky charms on birthdays and special occasions. I loved the variety and the artistic beauty of the little charms that were available.
I hope you are well and that Spring is knocking on your door my friend!

I love charm bracelts and have one but not added to it lately.
Your charm bracelet will hold such special meaning to you as it connects you to your mother and your sister, I think that is lovely!

That is a beautiful bracelet Zuzana! What a meaningful gift! I love charm bracelets although I haven't seen one for a long time. I think they are a very intriguing and mysterious piece of jewelery.

Hope you are having a truly beautiful evening!

I love charms. I have mine on a necklace. Each one tells a story...so very fun!

I had a charm bracelet as a kid and just came across it recently. I've never worn one in all these years since, though.

Oh wow!Does this take me back .
I have a bracelet with charms and each one represents a memory But I haven't worn it in some time as the kids have grown and so has my lifestyle changed. I hardly wear any jewelry anymore but I will change again and then all this will come out again.

Charms For A Charming Person!

The charm bracelet is a lovely idea as it means you can collect and wear memories!

I've never had a charm bracelet, but I've always loved them! Enjoy wearing yours, Zuzana, and sharing it's charms and special stories with others. :)
Hugs,
Zuzu

It is so nice for your sister to give you charms. You will only treasure your bracelet more and more with each passing year. I'm as curious as everyone else as to what each one represents for you. (I think I see a sun and sand theme, summer time)

I am charmed by the history that accompanies this beautiful bracelet. I like these charms. I like the variety of shapes and the stories they evoke.

This is beautiful. My Godson started a charm bracelet for his Mom and has gathered some lovely charms for her over the years. She loves it.
Cheers, jj

Oh yes... I have the same recollection about a sterling silver charm bracelet my mother used to wear! So see...we belong to that same sisterhood!

Oh! I just watched your dear Batcat video! So adorable! I almost cried when his little paw slowly stopped hitting up against the window as his friend walked away... In the beginning it was like he was grooming his friend! Total friendship there! (Edward is an inside cat now too. Too many pitfalls for cats on the streets outside). Thanks for sharing! Dogs and cats and birds (well, animals in general)...I just love them!
Have a great weekend!
Ann

They are very beautiful.

a wear a bracelet that was made for me when I was sick, it is supposed to give me good energy and guard me from evil. Whether I believe in that or not, it's not bearing to my wearing it. I love it, the meaning of it, the thought put into making it for me, the faith given to it, it all makes it worthwhile

Well, hello there, stranger! I'm finally getting around to visiting all my online friends.

I love those charms. I think the shoe is my favorite. It's very feminine. I've never had a charm bracelet before but I like them.

Gorgeous one! I love bracelet.
Cheers.

The girls I know who collected charm bracelets picked fascinating items, just as you have Zuzana!

My current charms were chosen by my sister and I think they symbolize the way she sees me – the two accessories mean I am a summer child and very feminine (although I think she thought those were cute.;) The hand is a hamsa hand, a symbol of faith and protection and the horse shoe is for good luck.;)
I am looking forward to be adding my own charms as time passes.

Thank you all so much for your very kind visits and lovely words about your own charm bracelets stories of today and of yesterday.