The Magic Of The Snow Globe. 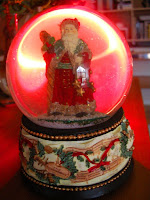 I do not know why snow globes still appear magical to me. Shaking the large ball in my hand and then watching the sparkling of the white shiny particles, as they settle slowly to the bottom, has that particular, mesmerizing effect on me to this day.

No one really knows where the idea for this amusing item came from, but it appears that it might have originated in France. Also called a waterglobe or snowdome, it was used as a paper weight at first. In 1889, a snow globe containing a model of the newly built Eiffel Tower was produced to commemorate the International Exposition in Paris, which marked the centenary of the French Revolution. This globe quickly became a favourite souvenir for attendees.

I only own one snow globe which I display on my book shelves during the months of December. Each time I unwrap it from the box I feel as if handling a very precious possession.

Oh, I always love when you make little movies. Enchanting snow globe - what does BatCat think of it? I just realized, your whole blog has become a snow globe! Nifty snow flake feature Protege! :)

I just love snow globes and, yes, there is something magical about them. Don't know what but I think for us adults it carries us back to childhood and a more innocent time☺

Of course, the magic is still there.

That's why we need Santa!

What a beautiful snow globe! I love the Father Christmas figure with the long flowing robe. I remember having snow globes as a child and would never tire of shaking the globe and watching the snow drift...very mesmerizing.
Did you know that you can't take a snowglobe on an airplane? It's a bummer not being able to buy one as a souvenier when traveling : )

I love snow globes. I don't think I've ever owned any in my life, but I know plenty of people who do. I was really always mesmerized by them as a child.

i think snow globes contain a bit of the magic of the season, the ability with the quick dash of the hand to make everything glittery with new falling snow...i like them alot.

Such a pretty blog entry! I did not know the origins of snow globes, so I learned something new today.
My three snow globes also come out only on Christmas time. They have a Nativity in them, and the most nostalgic music. They bring a little tear out each time I play them, yet I think they are beautiful. Again, so curious how some music notes trigger hidden feelings! :-)
*hugs*

Together We Save said...

Snow globes are so beautiful.

I love snow globes too! They are very pretty and magical. Your snow globe is very beautiful. A wonderful display. :)

I like the snowing effect on your page. I hope you are having a great week. I am just getting over being sick for the last week. ;( I feel much better today.

:) I love them too!
Have a beautiful day, Zuzana!
Zuzu

Zuzana..I found you through LadyCat...I love everyone that follows my favorite blog...Hot Toast and Jam....

I'll be following you along too....

Beautiful! I have a snow globe with Stone Henge inside, which I love. Lovely photos as always. Kath

Interesting information on the snow globe, Zuzana. I don't have one, but I think it would be a nice addition to my Christmas collection.
You always have such beautiful things to share with us.

Wonderful post Protege! This brought back memories - my mother had a beautiful snow globe that she bought in Glasgow and I too used to be mesmerized by it as a child (I wonder if she still has it?).
And your snow drops - how cute, made me smile!

this is a new thing for me. I do not remember seeing this before. Prabalby because I never lived in a place where it temperature oges sub zero.
but it looks magical and beautiful too

I have a few snowglobes, they're also holiday themed. I got one last year with a brown Christmas tree and the "snow" is actually green glitter. It plays the same song as your does.

I did not know the origins of snow globes, thanks for sharing!

That's a lovely snow globe. I remember my Dad bringing me snow globes from cities he'd travel to. Either white snow or silver glitter.. they always mesmerized me and still do. Thanks for this. :)

I still find them magical too.

What a lovely post. I've always loved staring into them, getting lost in my own thoughts and wanting to somehow climb through the glass into the mystical world inside.

what a cute video. the globes are mesmerizing. I think you can get lost in them and make a story up as you gaze into them. a chance to get away.

My grandmother had a snow globe when I was very young. I don't remember the scene inside, but I can remember shaking it and watching the snow swirl around and around.

I heard that a local store was selling snow globes with my city, Birmingham, featured inside. There is a tiny statue of Vulcan and the Alabama theater as well as other recognizable local buildings. I rushed right over there and bought one. I love it.

I love snow globes also! They have always seemed like a little fairyland to me and I especially love the ones with sparkle in them. I'm enjoying your Christmas posts! V.

I just remembered something: Have you ever seen the film "While You Were Sleeping"? It's set around Christmas, and stars Sandra Bullock, Bill Pullman, and a very special snow globe. This reminds me to watch it very soon. :)

I don't think I have a single one anymore, but I do love them. They are still enchanting.

BPG, Mimi, 1ondoncalling, LadyCat, Keith, Brian, Claudia, Together We Save (welcome), Shelly, Zuzu, My Farmhouse Kitchen (welcome), Kath, Kat, Blogaire, Sumandebray, sprinkles, Hilary, Nessa, Rebecca (thank you for visiting), Doreen, Stevie, V, Rosezilla – I am delighted to learn that you too have fond memories tied to these magical snow-domes.
I am always so happy when you stop by and I appreciate each and every comment you leave.

I don’t think you can grow out of loving snow globes. I have one for the year 2000, it is a globe of the world inside which turns to music of Auld Lang Syne. I also just bought one on ebay, the snow keeps blowing and it plays 25 Christmas tune. I felt silly bidding on it, but no one else bid on it and I got it very inexpensively.

Vagabonde, I am glad that you too love the magical snow domes. I applaud you getting the item on ebay, why not.;)
xo