As We Wait For Snow. 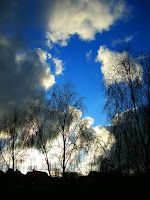 Apparently it is coming. Next week we are suppose to get snow, that is if the meteorologists are right. December snow, although highly sought after, is unusual in southern Scandinavia. Often we only get fog and rain. If November (and so far December) is any indication of the coming winter, it definitely does not include snow. It has been the wettest and the warmest November on record, failing to have temperatures below freezing, which is highly unusual.

Today is sunny and thus I ventured briefly outside. The December daylight is very fragile and the sun barely visible over the horizon, its shine pale and weak. Yet its rays feels revitalizing on my face.

As I walked around, I stumbled upon very unusual sights just outside my door, signifying autumn or spring, rather then winter.
First, a lonely bee found shelter under a leaf of my Mandevilla. It barely moved. I am not sure if its faith is sealed, but I like to believe it will survive winter somehow.
Next, my roses are still in bloom. Their colours vivid, the petals silky smooth and pristine, just like in late spring.
These were not the only flowers that seem a bit confused about the seasons. My spring bulbs are relentlessly pushing upwards. I have covered them with dirt, bark and fallen leaves. However this seems to be posing no hindrance for their persistence. Piercing through the decaying leaves, they are ready for spring. 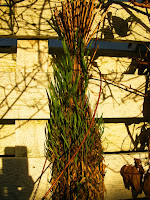 The most unusual sight though is of the dry bunch of oats that I purchased on the side of the road last December. Yes, about a year ago. They have been hanging on my fence, used as decoration and the seeds helped birds get through the winter. Imagine my astonishment when I see green shoots covering the dry stalks. I have no idea how this is possible, but I stood there staring at this image, a sight that felt unreal or some sort of a trick.

Or, perhaps it is just another indication that nature is beautiful, unusual, stunning and all times - magical. 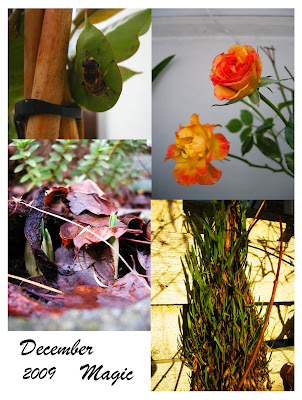 Wow.. that is amazing. I was seeing continued (roses..grass.. geraniums) and even new growth (spring bulb shoots) in various gardens up until last week. Then we got hit with some really cold temperatures.. of the -20C (-4F) windchill variety. And it's remained cold ever since.. brrr. I love that you still have your roses in such healthy bloom and that your plants are providing shelter for that bee.

"The most unusual sight though is of the dry bunch of oats that I purchased on the side of the road last December. Yes, about a year ago."

I was thinking oats... like in oatmeal you eat? Do they need to dry that long?

All I want is Snow and the family around the Christmas tree in December.
In Hungary it's still + C. Next week they say snow caming here 2! Juhuuuu! Have a nice weekend!

nature does have a way of surprising us with her resilience and beauty...i too wish for snow, perhaps a white christmas.

thanks for the warm wishes for my mom today! smiles.

Nature is majical indeed. I have been snug indoors watching 2 blackbirds trying to steal cottoneaster berries from the bush. I always delay cutting it until after the birds have feasted.

Mamma mia... may I tell you about what we are facing here? This is a standard winter season, we had a first snowfall three days ago, that left 40 cm on the ground. People begin to talk about a snowstorm for more than 30 cm in half a day, cold weather and heavy winds. This one was borderline...

Last night the thermometer hit -18°C (no windchill factor here). Cold cold cold... and this is nothing compared with the -30 and below that we are expecting next month.

Not necessarily funny, but we are so used to it...

I find your flowers literally amazing. Here they would be buried... below the snow.

Your collage is very nice and I love the color of your rose. My roses are gone – I only have one old-fashion rose left – but this past week we toured the Georgia Governor’s Mansion and there were some pink roses still alive there. Today though it is cold but I don’t think it shall snow. I am wishing for some snow soon.

Wow, that is unusual! Here in California it's the other way around.
In Sacramento (Calif.'s capitol) we had a snowfall last week at sea level (so not only on higher altitudes) -can't remember when that happened, so long ago!)

Oh my! Those roses are beautiful. Glad to see you're taking in the unusual seasonal sights. Have you had any gingerbread yet? The Bach

Could the oats have had some little seeds nestled inside? Strange! It's wet and cold here. And I'm worried about my plants. I just planted some perennials a few weeks ago.
Brenda

love your description of life and nature around you. BYW, I have some snow to share if you would like!!

Have a wonderful weekend!!

Looking at some of your past posts I saw the one where you published your two paintings. In case you have not found out yet who the painter is I believe his name is Panjoda as I found one of his on German ebay (but I cannot read German) here is the site: http://cgi.ebay.de/Panjoda-MEER-Italien-BRANDUNG-Landschaft-WELLEN-ABEND_W0QQitemZ350290600506QQcmdZViewItemQQptZMalerei?hash=item518ef2623a hope this helps.

At least it's snowing on your blog :)

We might get some more this week, too... though I think it's supposed to warm up significantly on Tuesday (we're running our practice 5k that day, so I hope so!)

If you'd like some snow, I'd be more than happy to send some your way! We got some more this morning. Ugh! I like the first real snowfall and I like snow on Christmas day. Beyond that I don't really care for it much.

I do like the snow on your blog though! I've seen others with it on theirs and even asked someone how to get that effect. She gave me the code but I haven't used it.

Your roses are beautiful! I miss mine. Maybe they'll be back in the spring, if I'm lucky. I don't take care of them like I should so I'm always amazed that they come back each year.

The oats that you bought, are they like the oats you would use for oatmeal? Hmm...I didn't know they sprout. Interesting!

Our winter was like yours up until last weekend when it snowed. The snow melted fast but the temps have remained chilly since then.

Your sky today was a brilliant shade of blue. I would love it if you could take some time sequence photos of the sky. I'm so curious about your sunlight in the winter.

The orange color of the rose is really different. Pretty.

Zuzana: You are right about the fragile nature of winter! xoxo,
Michael

So many lovely posts I have once again missed. (Well not missed since I have enjoyed catching up on them.) But it does seem tht time just flies by during December as I check back and it has been 5 posts since my last visit. yikes!

I really enjoyed your documented exploration of nature today. I can't believe that your tulips have decided to try to bloom. That really is just crazy. I am so glad that you got to enjoy some sunshine as well.

I also was intrigued with your post about moving back 10 years ago. At first I thought you were holding Batcat.

Ah yes,...Flashback Friday. I do so love Harry Conic Jr. Especially his early stuff. Thank You for sharing.

As always,...your entries speak to me. What a nice break to stop by your blog!! xoxox!!

Was not there for a while and I missed all the activity. I adore your pictures. They are so real and look tactile.

Such a beautiful post dear Zuzana. And you are right: nature is something so magical and wonderful! People are chasing perfection all the time, yet it would be enough to take a look outside. Cause perfection is nature.

I believe that flowers are blossoming (no matter how cold is outside) when they are truly loved :-)

Hope you have a lovely weekend, cheers: Evi

I think we may share a weather system as we too have been promised December snow. It has been the foggiest since I can remember; every day, we wake up to eerie, still fog, grey light and a quiet the likes of which I've never experienced.

The calm before the storm methinks.

I love your roses, they are so vivid and beautiful. I love the little shoots coming through; already makes me think of spring.

All your visits mean the world to me, thank you for finding the time to stop by.

either that or that this world climate problem is really happening. It is hot in here. It is a tropical country, but December has somehow been rather cool always. Not this year. We did not have rain, and looks as if we won't have our coolness. I will write about our "tropical Christmas season" later on the week. It's and odd idea for many, but something we have become used to on this corner.

Hey! speaking of climate change, has Guatemala been mentioned in your country lately? According to our newspapers, we are among the countries often spoken of in that world meeting about climate held in Denmark. Apparently, we are among those who will suffer the most because of the irresponsibility of the big countries. Not a pleasant future.

Claudia, thank you for always finding the time to stop by dear friend. Yes, I am following the COP15 meeting, but i am not sure it is going that well. At least they are trying to make a difference...
xo