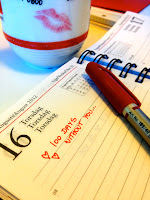 Since my husband left our home - and me - in the beginning of May, to temporary serve another country for four months, I have carried out a small, yet vital ritual every evening.
Just before I turn in for the night - I cross off each passing day in our calender and say a little prayer for his safety.
It has been an incredibly rewarding process, watching each week pass and the blank page of each month becoming saturated by red marks - signifying my personal countdown.
Thus this Thursday marked the hundred day since we parted.

One hundred days alone, one hundred days without his kisses, his touch and his presence, one hundred days of readjustment, longing and worries. Yet hundred days full of personal growth and new learning experiences, making me realize over and over again how much I cherish my life and its versatility and simultaneously making me so aware of the precious, deep, passionate and foremost pure love that we share between us.

One hundred.
A number that can feel infinitely large and yet infinitely small. One hundred seconds are barely two minutes of our lives - nothing but a fleeting instant and we can grasp and comprehend it. One hundred years can define our own life time - if we are lucky - and we can still understand this duration. Yet take one hundred decades, which comprise a millennium, a time span infinitely more difficult for us to imagine and which can see entire civilizations come and go.

Thus, to celebrate my one hundred milestone, here are some random fun and interesting facts about this symbolic number.

· In Latin, 100 is centum and the Roman numeral for this number is C.
· 100 is the basis of percentages (per cent meaning "per hundred" in Latin), with 100% being a full amount.
· 100 is the sum of the first nine prime numbers, as well as the sum of four pairs of prime numbers (47 + 53, 17 + 83, 3 + 97, 41 + 59).
· On the Celsius scale, 100 degrees is the boiling temperature of pure water at sea level.
· The United States Senate has 100 Senators.
· "The First Hundred Days" is an arbitrary benchmark of a President of the United States' performance at the beginning of his or her term.
· Most of the world's currencies are divided into 100 subunits; for example, one euro is one hundred cents and one pound sterling is one hundred pence.
· The number of years in a century is 100.
· The Hundred Years' War (1337-1453) between France and England lasted 116 years.
· The largest bank note in England is the one hundred million pound note, nicknamed Titan.
· A centurion was an officer in the army of ancient Rome, commanding 100 men (centuria = 100 in Latin), although in reality he only commanded 60-80 men.
· In the Christian literature, the number 100 appears as symbol of the celestial beatitude.
· The second reigns of Napoleon lasted 100 days, from March 20 to June 22, 1815. It ended by the defeat of Waterloo.
· In the year 100, the wheelbarrow makes its first appearance in China and bricks become the primary building material in the Roman Empire.
· 100km is the altitude at which the FAI defines that spaceflight begins.
· Yesterday it was 100 days since I last kissed my husband.♥♥♥ 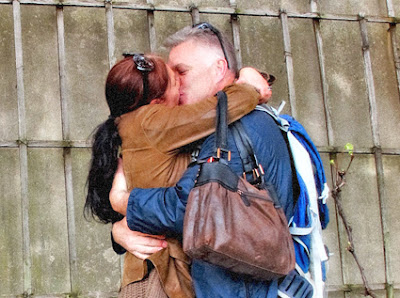 Now that you have crossed 100, it time to start the countdown :)

Hope the days melt sooner than this post gets comments. Zuzana, only you can weave posts out of an emotion that pains and torments you.

God be with you.

Hope you multiply the love by 100 when you meet him Zuzana:)

Hang in there Sweety, he'll be home now before you know it.

This is what love does. Cherish the moments forever.

He is a blessed man to have one who loves him so deeply.

I am glad to see you are making the most of this time on your own. Even if it's hard you are right dear we learn a lot.
Soon it's more than 100 kisses you'll give him.
Have a lovely week-end Zuzana. xx

WHAT a homecoming he will have! LOVE this post Zuzana and the wonderful photo too!!! Can you believe that 100 days have passed!??

Your photo at the top/sidebar is lovely too! You look wonderful!

No limit for kisses!!

That is such a good idea to physically mark the days off. It gives you a viable action every night to show you are making progress. And the prayer is the best part.

That is such a long time! I am glad that you are experiencing growth during this time. Looking forward to your next homecoming picture!

Your time apart is almost over now and soon he'll be home with you again.

"100 year of solitude" one of my favorite books.
There is healing in counting, each day passing is one day less to wait.

My daughter always makes a paper chain when she's counting down days to something special! She loves to see it get shorter and shorter with anticipation of the coming event!
I love how positive you ALWAYS are no matter what the situation! Life is good and there is GREAT in every season of life.
You look spectacular by the way!

Oh my goodness, is it really 100?
That's a long, long time, it must have been really difficult. You're nearly there now, and you can make up for lost time when he gets back, we'll not expect to see you for a week or two, but just give us due warning!
I love the picture of you two kissing, with your handbag slung over your arm!

You look so beautiful I am sure he misses you as much as you do him.
It's nice to come home to love.
My prayers are with you :)

Seeing that so many of you seem to comment the last image;) I can add, that it was taken by my father in law this April, right after my husband proposed to me in front of our families in the gardens of Prague castle. We are totally unaware that we are being photographed.;)) That is why I love that picture, it is so full of sincerity and genuine love and passion.<3

One hundred days is a long time of counting, Zuzana. And now they are behind you. Give him plenty of kisses!

Aaahhhhh 100 days!! How many more?? I commend you my friend!! What a beautiful woman with a beautiful soul he must be desperate to get home to! :) And what a home coming he will have indeed!

100 days alone, its really tough. Hope and wish you the remaining days go off sooner.

And far fewer until his return. Then we'll probably have to miss YOU for a while. ;)

Interesting facts about the number 100. I'm always learning so much from you.

Now that you have the first 100 days out of the way, the rest of the time waiting will seem so short in comparison.

I'm kind of bummed summer is over because I've been wishing the time away and haven't really taken the time to enjoy it the way I should have. But I'm also very excited it's over because that means I get to go back to school. Just one more week!

I really like the picture of you in your sidebar. You'd look really good as a redhead!

i feel for you dear zuzana......that ritual helps to keep you strong. 100 is a critical number to have arrived at symbolically.....let the next days fly by swiftly. that photo of you both together tells a powerful story.

wishing you a blessed week♡

Marking off the days and jotting your thoughts is such a good idea. You're doing great and your man will be home soon :)