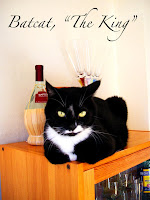 It has been a while since I dedicated a post to Batcat, the King of my white house. For those of you who are not yet acquainted with my sophisticated roommate, always dressed in an evening suit, I can easily summarize what he is all about in one sentence, as the Irishman did once; Batcat adds ambiance to my home.

Yes indeed, like a proper cat, he relaxes all day long, sleeping the hours away. Except for the occasional awakening to have a snack or two combined with tranquil contemplations, most likely pondering important issues that I would not understand, while gazing out of the windows. Watching birds and potential intruders and ultimately being the overall master of his domain.
The expression on his face at all times makes me aware of the fact that he is indeed so very superior to me in every way.

The only time I can make him move, while watching the black slits in his green eye expand to the size of round saucers even in pure daylight, is in the mornings, when I throw frozen peas on the floor. Yes you heard (read) right. Batcat locates his hunting instinct each morning as I prepare my lunch, which consist of frozen peas. Usually, I throw a few of them on the floor, upon which Batcat takes off like loon hunting the rolling green beads all over the house, as they spread in all the directions, confusing him greatly. He is hilarious to watch and I tried to capture the spectacle on film, but it is not that easy to throw peas and operate a camera at the same time.
Needles to say, as you can all imagine, the floor of my house comes weekend is full of dried peas.

I managed to take one good picture of a very satisfied cat guarding a pea after hunting it down successfully. Now I wonder if this love for peas makes him of a royal descend. Maybe I will try to put one under his blanket in the evening and see if he complains the next day over an aching back. 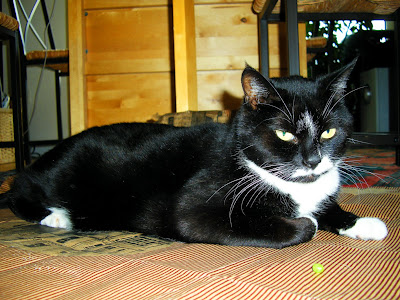 I dont have any peas in the freezer at the moment Zuzana.Does it also work with frozen Brussel Sprouts???:)

Oh you have made my morning Zuzana - with tales and photos of gorgeous Batcat. Now I wonder if he is saving that one lone pea for later? I love the association with the Princess and the Pea, one of my favourite fairy tales.

Sorry not to have been commenting as often - off to have a quick catch up now.

Wishing you and Batcat a lovely day!

I love his suit! Such hilarity with the peas. Hope HRH has a good day:)

jajajajajajaja.
very cute your cat. a hunter of peas and a sleeper. thanks for sharing it. The king of your house white. thousand caresses for him. kisses for you.

You are so funny. Let me knows if he catches just one eye of sleep tonight.

Your cat is very cute. Hunting down peas? That should be a fun thing to watch. He looks so funny guarding that pea in the picture.
"All Hail King Batcat!"

I thought in the fairytale the pea was intended for a princess and not a King.

Yours is a magnificent cat, Zuzana, I suspect he'd need more than a pea to unsettle him.

haha. that is amazing. i love cats and their quirkiness...my cat is a nut...but i love her...she slept on my lap while i watched avatar last night, occassionally looking over her should er to see what i was watching...

Cats are so easy to be photographed. They sit still and look into the lens unlike dogs who are very hyper-active.

Just look at your batcat, sitting smug and cosy! He has all the peace and tranquil of the world. Now I am thinking of Tom of Tom and Jerry!

DELIGHTFUL! Batcat truly is royalty! Cats are simply wonderful...I would love to see him "hunt" his peas. I love his evening suit...and you know that our new kitten, Sylvester has one too! ;)

I just read the "Princess and the Pea" to Madeleine the other night!

He's very handsome in that tuxedo of his. Great, cute post!

What a completely charming post! So nice to meet Batcat!

Zuzanna: I swear! Batcat was on my mind at work this past Tuesday and made me laugh. "Pondering issues of the day". lol! I like his "Tuxedo" too. Sounds like the purrfect Cat!

how cute!! I can only imagine him chasing the peas :-)) Aren't animals just the best? My Lucas and Mateo also have their "unique" things, which I enjoy observing each time. Hugs to Batcat!

have a great day!
*hugs*

There is a blogger out there who needs your support more than most others do. He is an inmate in a prison who is attempting to have a voice. He has been writing for several years and would like someone to read what he has to say. He does not have internet access and his submissions must be posted by his sister, who in turn sends him comments for him to respond to. I hope you will at least take a look at his blog and then if you moved to do so, leave a comment for him and follow his blog and tell others about it.
thesagaoftheconcretejungle.blogspot.com

How lovely to have a post all about Batcat. He certainly looks like the King!
Mind you dont step barefoot on those dried peas OUCH!

My favorite posts are about Batcat! I love his white mustache.

He looks nothing like my kitty did since they're two different breeds but I like to imagine their personalities were very much the same. My kitty didn't just THINK he was superior, he KNEW he was!

Awww...this made me miss my cats! The do add so much to a home, don't they?

This was such an adorable post. Batcat sure does have a fun personality. Definitely royalty.

Batcat adds a lot of charm. I like his funny habit of chasing peas. We have a cat with the same distinctive black and white fur. Scout has a white face with a black patch over one eye and snout. He is superior also over us.

What a hoot! Great pic of your cat guarding the peas!
He's quite a handsome guy.
jj

He is very cute and always ready to party in the evening suite.

Batcat is SO COOL! My wife and I would have hours of fun just throwing peas on the floor and watching him go NUTS! Fantastic! :P

That is hilarious! I would love to see him on the hunt. Who knew that all it would take to make a cat happy is a few stray peas.

Ha ha ha, this post made me laugh as I visualized this morning scene with you and MR. Batcat...he's really graceful I must tell...I have a little black rabbit called Kormi...we are in love officially!

Have a lovely weekend my dear friend.

Oh, you are so hilarious!!! The prince and the pea, eh? Love that! What a beautiful cat!!!And so much fun! It is so wonderful to get a glimpse into your world! So much peace and beauty in every area of your life! Sending you love and wishes for a wonderful weekend!! ~Janine XOXO

What a cute cat Zuzana! Have a wonderful weekend my dear friend.

and I always thought it was a dog's life!! frozen peas? How did you ever come up with that idea?? ;0)

Tony, Jeanne, Keats, Alberto, Elizabeth, Mr. Stupid, Elisabeth, Brian, Susan, Jill, Snappy Di (welcome), Janelle (welcome), Michael, Keith, Claudia, Lee, Kath, sprinkles, Betsy, Nessa, Paul, Scribe, Joanna, Rajesh, Mel, Jingle, Tony, Stevie , Evi, Janine, Philip and Eternally, thank you all for you very entertaining comments! Batcat is vey flattered over this attention and sends his regards.;)
He is a cutie and truly puts a smile on my face every single day, my life simply would not be the same without him. As they say “Life is better with pets”.

Thank you all for your kind visits, as always; they make my day.

That is a delightfully sensible cat. A wonderful post, my friend.

Lovely cat and obviously a great hunter (of peas!)

Lovely cat and obviously a great hunter (of peas!)

Sandy and Betty, thank you so much for your great comments, i am glad you enjoyed this post about Batcat.;) xoxo

How anybody couldn't possibly just adore cats is beyond me. They always delight. I LOVE that photos of Batcat guarding the pea. Priceless. Please give the sweetie a scratch behind the ears for me. :)

I'm waaaaaaaaay behind .. trying to catch up. I might not comment on all posts but rest assured that I'll read them.