A City In The Heart Of Europe.

"I see a majestic city, whose glory will reach the stars!"

Such was the prophecy of Libuše, a beautiful woman of royal blood, who married a humble ploughman, Premyšl. According to the legends, she had visions of a glorious "golden" city and her dynasty ended up ruling Prague from the castle of Vyšehrad.

Everyone who has once visited this city will tell you that it holds a certain magic; one that will allure and capture you like no other metropolis.

My father was born there. He studied at Charles University, where he met my mother. Today both my parents live outside Prague, where they moved about three years ago. I never lived in the city myself, only briefly in its vicinity when I was a child. But I have spend almost all of my childhood summers here, until the age of twelve. They were spend in company of my grandparents and the rest of the family on my fathers side.

I knew already as a child that this was a special place. I read its tales with excitement and fascination and have always been intrigued by the "city of hundred spires". Positioned truly in the heart of Europe, it has played major roles in its history. And indeed history can be sensed everywhere. It is almost as if the city is an aged book; the old cobbled streets are lines in stories that will take you back into the time of knights and kings, into wars and to the time of peace, when the city flourished and its powerful rulers gave rise to the magnificent castles, bridges, churches and cathedrals that are its trademark to this day. 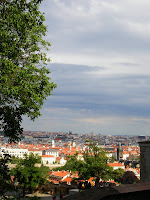 It would take me days and days to list all the sights, packed with tales of history, describing the rise and fall of the capital of small kingdoms and even empires throughout the times. Instead I decided to post a collage of pictures depicting the main historical places which I visited on my recent trip. I have seen them all, numerous times before. Yet, they seem always new to me. Each visit is different than the previous one, as I am different as well. Each time I see something new. This time I saw everything once again fresh and unexplored through the eyes of the Irishman. Unlike during other visits, on this occasion I tried to look up, at the old houses and the striking architecture and the multitude of "house signs"; small ornate pictures illustrating a particular spot, aiding greatly in recognition of places in the -often illiterate- past.

What makes the city unique is the picturesque downtown, that stretches from the castle, which towers over the river Vltava (Moldau) and continues spreading over both river banks, which are connected by the legendary Charles Bridge. This creates almost a theater backdrop, appearing at times unreal. Very romantic at night, when the historical buildings become illuminated, one can feel the past and the present combine in a fairytale like setting.

Today, the city I remember from my childhood doesn't exist. Progress, as always, brings changes. I refuse to contemplate to what extend these changes bring benefits or not. The optimist in me will at all times think that change is the only constant in life. One can either choose to be assimilated by it, or to embrace it and realize that time will never stand still, only in ones memories. 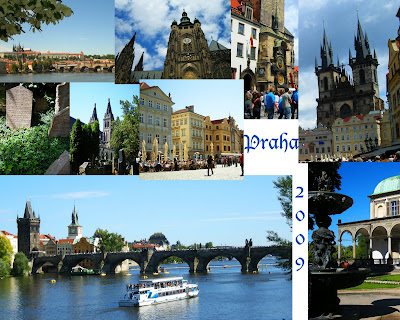 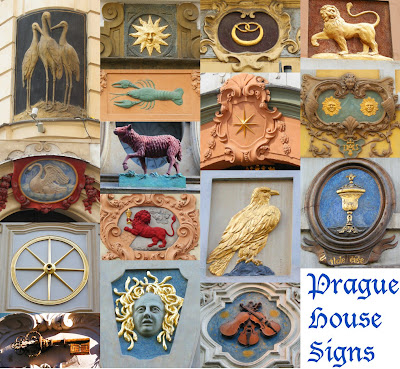 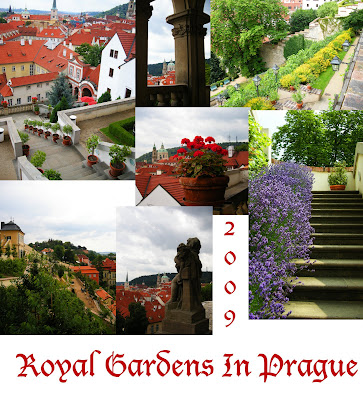 You write so beautifully and emotionally about Prague--I can understand just from looking at the photos and reading your words what kind of pull on the heart this city has for you.
It must surely be one of the most beautiful cities anywhere!

You aren't the first who has told me about how beautiful Prague is, but you sure are the most expressive and passionate about this wonderful city. I would love to see it one day. It would be like going to camera heaven!

A lovely description. I have been to Prague and walked my feet off! It is beautiful as you say.

Wow! What a magnificent place! I envy you on so many counts: your train trip (I'm not big on flying - not the actual flight, more the imponderables), the beauty of the architecture, the landscape, the colours, the history. What a fantastic place to have spent such a part of your life.

I noticed in your profile, Protege, that you are in Science. What exactly do you do? (E-mail me if you want.)

What a gorgeous city and post about your travel there. Thank you so much! Seeing places through the eyes of blogger friends is one of my favorite parts of blogging. I enjoyed this very much. xo

=Tina,
thank you for such a lovely comment. yes, I love Prague and it will always be a special place to me, even it is changing endlessly. I hope one day you will be able to visit it before it becomes too expensive and too exploited.
xo

=MelRox,
thank you so much for that compliment; I will definitely try.;)) Thanks for your visit.;))

=Hilary,
that was a wonderfully kind thing to say my dear friend.;)) And yes, you would enjoy taking your camera while walking around in this historical city, I sure hope you get the chance one day.;)) xo

=Reasons To Be...,
yes, walking ones feet off is a perfect description! So did we this time around, 10h/day of constant walking.;)) Glad you enjoyed visiting Prague.;))

=Kat,
thank you for so many lovely words in your comment; so glad you enjoyed visiting Prague with me through this post.;))
Yes, I am a scientist (biochemistry) and have written a bit about my work on my blog (under "work" label);))

=sallymandy,
I agree, I too enjoyed reading about other countries or about the way people travel and their destinations. It is more familiar then seeing a traveling program on TV.;))
Thank you for your always lovely comments.;))xo

What an absolutely beautiful city! I'm enjoying reading about your travels. I enjoyed your train video and all the wonderful sights. Thanks!

Thanks for the photos of Prague! I really do need to visit that city. :-)

What a beautiful, poignant post. Thanks for sharing your enthusiasm with us as well.

I just returned from some of my travels and am not going to attempt to catch up on the back-reading of most blogs. HOWEVER, yours is most certainly being read word for word and savored. Thank you for the beautiful descriptions and photos. I visited Prague as a young teen in the seventies and the machine gun carrying border guards who came on our bus waving guns frightened me so badly, I'll confess I just wanted to leave the country. Sad but true. I missed alot of beauty because of ugliness. A tale of life, isn't it? But I am older and wiser now and know that even if you must search hard for the beauty, it's always worth the effort.

Prague is one of the most gorgeous cities I have ever visited! Living in a city that just had it's 20th anniversary, I can only awe at the history and memories and traditions that lie in Prague.
I truly loved your Prague blog!

=Donna,
glad you enjoyed this little picture walk through a lovely city.;)) Always glad when you stop by.;)
xo

=Keera,
considering how much you enjoyed Berlin, you will truly love Prague.;)) Hope you can visit it soon.;))

=Rosezilla,
thank yo so much for your kind words, glad you liked this post about Prague.;))

=Beverlydru,
so sorry to hear about your not so nice experience in the communist past; but I can relate to the fear you must have felt. I hope you will be able to mke it back one of these days, as the city holds so much beauty and appeal for an interesting person such as yourself.
Thank you for your kind words about my posts, they mean a lot to me.))

=Julie,
so glad you agree and I hope on your next visit you will be able to visit Bruncvik as well.;)
Thank you for the compliment, dear friend.;) xo

Okay, after reading all of these posts...I really want to visit Prague now! I have mostly gathered my information from guide books and internet sites, but I have really enjoyed getting to read your stories and memories. It makes it more real.

I can't wait to go to Prague...Once I was driving through Prague...It's a beautiful city and one of my best friend is from Prague...I will definitely go there when I will move back to Europe...
Thanks for this beautiful post dear Zuzana...Love: Evi

=Jackie,
I am glad that these posts inspired you to do some traveling in the former eastern Europe.;)) I know what you mean, sometimes recollections of someones travel can be more beneficial then sights listed in guide books.;)
xo

=Evi,
we do share a lot of common history.;) I have never been to Budapest, but that is definitely included in my future travel plans, as I have heard the city is amazing.
xo

I can see your love of this city in your writing - it is so evocative and passionate. Your posts about Prague make me want to go back and explore and see hundreds of things i missed the first time.

=Cairo,
how delighted I am that you decided to read my old posts and enjoyed them, leaving many comments. I really appreciate it.;)
I hope you will have a chance to revisit the golden city, as it is a city that is worth coming back too. I am happy that you got inspired to see new sights for your next visit.;) xoxo